Antique Undies Up Close and Personal

So you're back to see all the teeny tiny details of someone's 100+ year old chonies eh?  Well, you're in luck.   Fair warning, this is a very picture heavy post!  You can click each photo to see it larger. 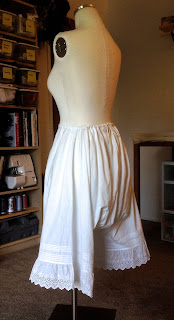 These are open crotch, straight legged drawers complete with pintucks and eyelet trim.  I picked them up from an antique store last year.  As you'll see, every seam is finished in some way or another, making these washable and durable.   They are fitted with darts and a drawstring, and tie in the back. 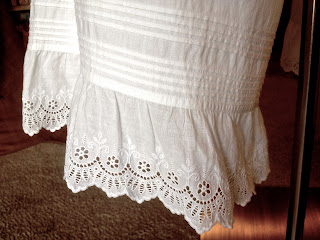