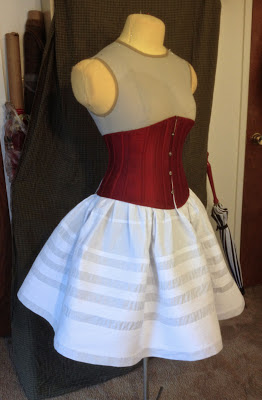 In the middle of all the craziness that was Dickens Fair and the holidays, I got the irresistible urge to make a corded petticoat.  I am obviously not sane.  Here's how I went about it.

First off, I chose to use cotton organdy.  I've used this stuff for years as an interlining in bodices, but it's also great for petticoats!  While the cords do most of the work of making the petticoat stand out, there's no reason you can't help them along with your choice of fabric.  I got my organdy from Stone Mountain and Daughter in Berkeley.  Most of the time I've gone there they've had two kinds; one is a very fine, high quality fabric (with a price to match) that I use as an interlining for nice bodices, while the other is cheaper and perfectly fine for petticoats and such.  Beware, the cheaper one feels like rough paper and is too stiff straight off the bolt.  Once it's washed it has a much better feel to it, and it retains the perfect amount of stiffness.

There are two main ways to hold your cords in your petticoat.  You can make a single layer petticoat with tucks to hold the cords.  Maggie's fabulous corded petticoat would be an example of this method.  When using tucks, you'll need to make your petticoat much longer to start with, as it will get shorter with every tuck sewn.  Your cords will also be spaced apart at least the width of your presser foot.  There are many beautiful examples of this technique, and I do like it.  However, for this one I really wanted the look of cords butted right up against each other, so I had to use the second method.


If you want your cords packed together tightly with no space between, you'll have to use two layers of fabric.  You can use two separate pieces of fabric, or you can simply fold your fabric in two, with the fold becoming your bottom hem.  I folded up the hem of my fabric about 15" and put all the cords within that space.


While the above examples use fat cords (saves time, goes quicker), I wanted the look of lots of tiny rows of cording.  I've used synthetic rattail in corded corsets before, but I wanted something in a natural fiber, and something that would be relatively cheap considering I'd be using lots of it!  I ended up using Sugar 'n Cream cotton yarn after seeing Koshka's beautiful hand-sewn corded petticoat.


I started off with a piece of fabric 100" by 45".  I sewed the two short ends together to make a tube about 99" wide, then flipped up the bottom edge about 30" with wrong sides facing together and pressed the fold.  I wanted a bit of space at the bottom before the first cord, so I stitched my first line about 1" up from the folded edge.  I then swapped to a cording/zipper foot.  I sandwiched a cord between the two layers of fabric and butted it up as closely as possible to the line of stitching.


I found that pushing it most of the way into place between the layers, then using my fingernail to push the cord into place from above helped quite a bit (see photos below).


I stitched the cord in, pausing every foot or so to stuff and scoot more cord into place.  Rather than make a full row, then start over on a new one, I just kept going in a spiral fashion.  Had I ended each cord and started a new one, the petticoat would have buckled along the line where all the rows of cording ended.  Spiraling the cord also allowed to just continue sewing without pause until I felt a section was complete.


I didn't really plan out a design ahead of time, so I sewed cords until I liked the result, then skipped an inch and started a new batch of cording.  I ended up with a total of 56 rows! 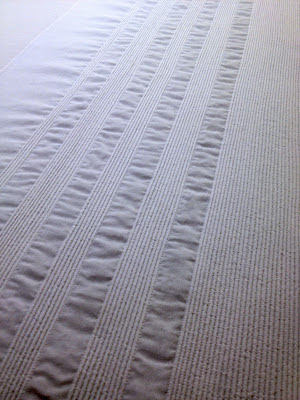 When I started, I was just messing around and wasn't sure if I was making a short petticoat or a longer one.  I ended up deciding on short, so I folded the excess fabric at the top over and flat felled it to the top edge of the layer I'd folded up in the beginning.  That left me with a finished length of about 20".  For the sake of being able to wear it immediately, I put an elastic waistband in.


A short corded petticoat like this isn't exactly historical, but I thought I might use it under some knee-length skirts for now.  I may replace the elastic with a proper waistband in the future, or I may take the waist out entirely and use this as a corded flounce on a longer petticoat later.  I might also add some lace along the bottom edge.  For the time being, I think it's cute and functional as is! 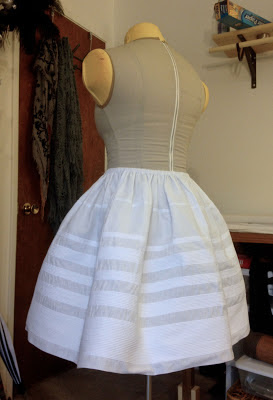 Have you made a corded petticoat?  It's a lot of work, so show off a bit and link to your creation in the comments!
Posted by The Laced Angel at 11:00 AM