For a woman who wore a buzz cut for 4+ years, I have become more than a little obsessed with 1830s hair. 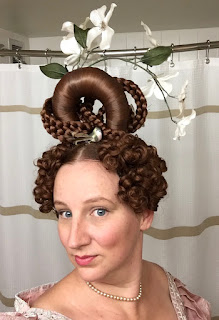 While staring down the gauntlet of a rapidly approaching Costume College weekend, I realized that I simply wasn't in the mood to run myself ragged trying to finish new outfits. Instead, I focused on spiffing up some old ones with fabulous hair and accessories. 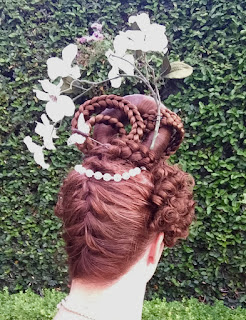 Like many historical costumers, I used to loathe the 1830s. Since then, I've figured out the secret: go big or go home. If you're attempting to out-ridiculous the original Romantic era, you're pretty much doing it right. The 1830s simply do not accept any sort of half-assing it.


Apologies are in order, because I didn't take a single photo of the construction of the hair pieces. It was based it on this fashion print. I carved down a styrofoam disk to form the ring structure, then wrapped 24" hair wefts around it. A touch of glue at the end of each weft was enough to keep the hair in place. The ring is stitched to a buckram base so that I have a way to bobby pin it to my head. The rest is just various 3 and 6 strand braids arranged in various loops, also stitched to the base, or to the ring as needed. I clipped the buckram base down as closely as I could, then pinned it atop my head. I French-braided my own hair from the nape of my neck upwards, then wrapped my braid around the base to disguise the join.


While I usually use my own hair for the front curls that are so common in this era, this time I purchased two of these bang extensions and curled them up ahead of time. SO MUCH EASIER. I'm never using anything else again.

From there it was simply a matter of adding flowers, a butterfly, and a bird. If anything, there's not enough STUFF in it. I need to add more ribbons and flipperies. The 1830s did not skimp. 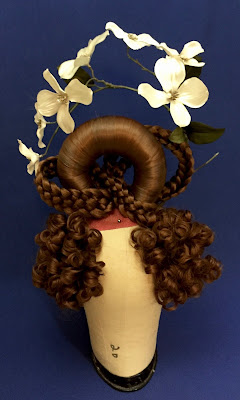 I've also come to accept that I may have been a bit harsh on the pink dress in my last post. I wore it again with a few improvements for the 2016 Costume College Gala and fell in love with it for the first time since I made it. The inside may still be a hot mess, but the outside is looking good! 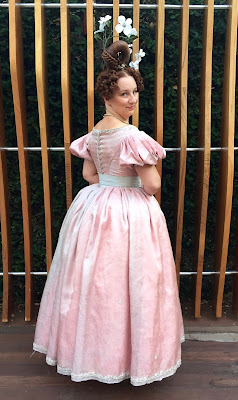 To be fair, when I originally made this dress two years ago, it was a last minute compromise. I needed an 1830s frock for an event, but  knew I didn't have time or cash to make the dress I wanted. I threw this together in less than a week. I used a reject sari that had moldered in the stash for years because it turned out to be super synthetic and the complete opposite of what I thought I had bought. The sleeves were the first wearable prototype of a pattern I was trying to create, and fell short of the mark I was aiming for. I took every shortcut I could while making the dress; the seams were so badly finished that it barely survived its first outing. On its debut there was no sash, not enough petticoats, and my hair was kinda sad; all of this contributed to my dislike of the dress.

Even when I fixed some of the shortcomings, added a sash, better hair and wore the much improved version out this last spring, I couldn't shake the disappointment that accompanied its first outing years previously. Though the dress was vastly changed, that original discouragement carried over to my post about it.

Flash forward to this last weekend: I made a new bum pad that worked wonders, re-vamped my Ugly Puffer (see HistoricalGarment's instagram photo of American Duchess and my scandalously unhistorical puffers) and worked up that FAB new hairdo. The low hotel lighting mellowed the shiny metallic-poly shine of my sari into a lovely soft sheen. I listened to my friends, who loved the dress (thanks again Lauren!). I forgave my sleeves for not holding the sharp pleats I originally ironed into them, and simply reveled in the ridiculousness of the poofy wonderfulness.  AND IT WAS AWESOME.


Sometimes a few tweaks are all it takes to turn a disaster into a success. Sometimes it takes a while to move past perceived shortcomings. Sometimes you've got to just let it go.

And sometimes you just need really fucking awesome hair.
Posted by The Laced Angel at 9:00 AM