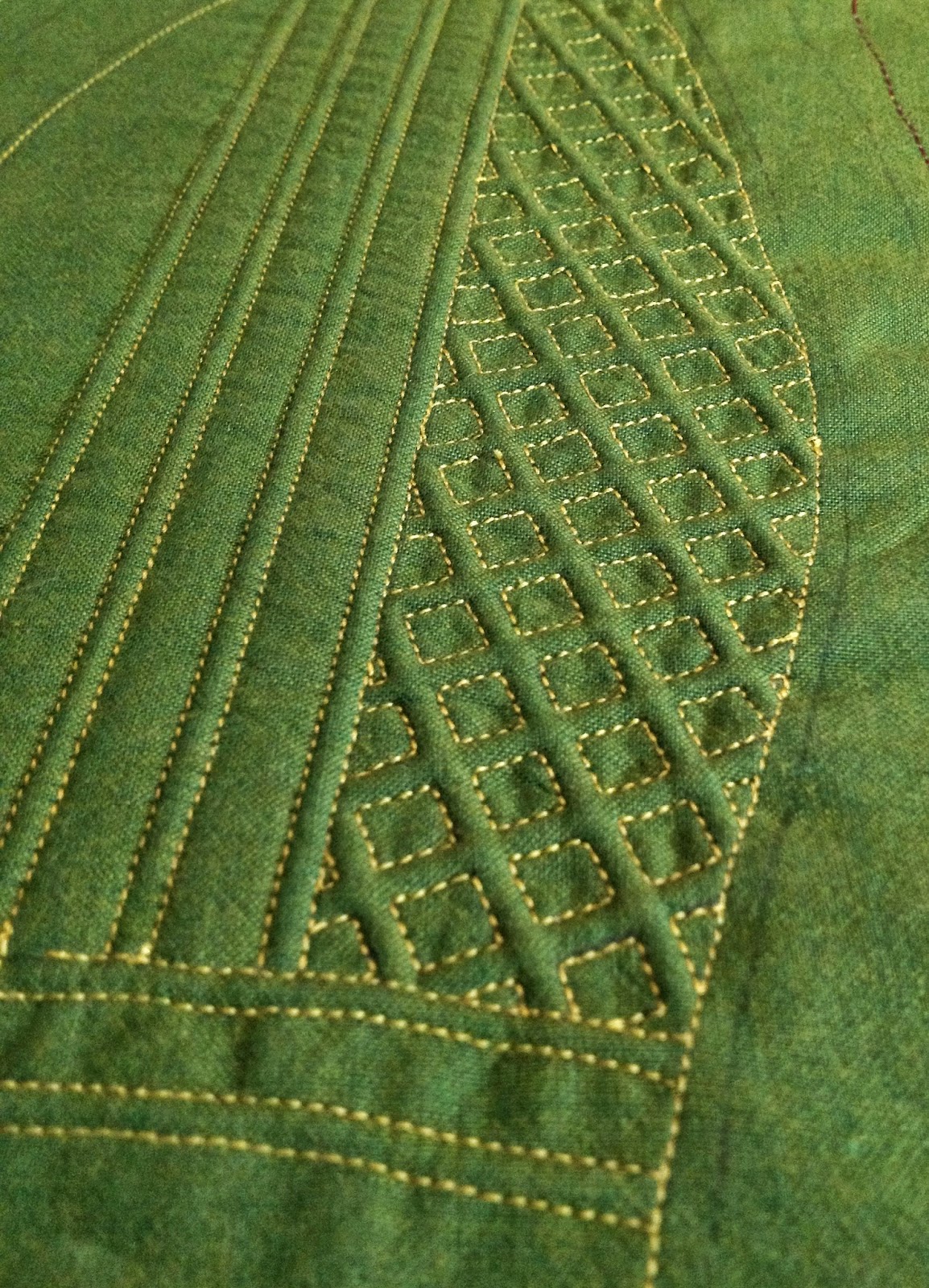 These stays are certainly the most complex cording project I've done, so I wanted to share how I've been going about it!  First off, I'm using a totally different cording method than the ones shown in my Making a Corded Petticoat post.  In both methods shown in that tutorial, the cord was put in place first and its channel was sewn around it.  Those methods work just fine for a corded petticoat, but won't work very well for these stays.  Instead, I'm sewing channels into the fabric first, then inserting the cording afterwards.  As a reminder, this is the pattern I'm working with: 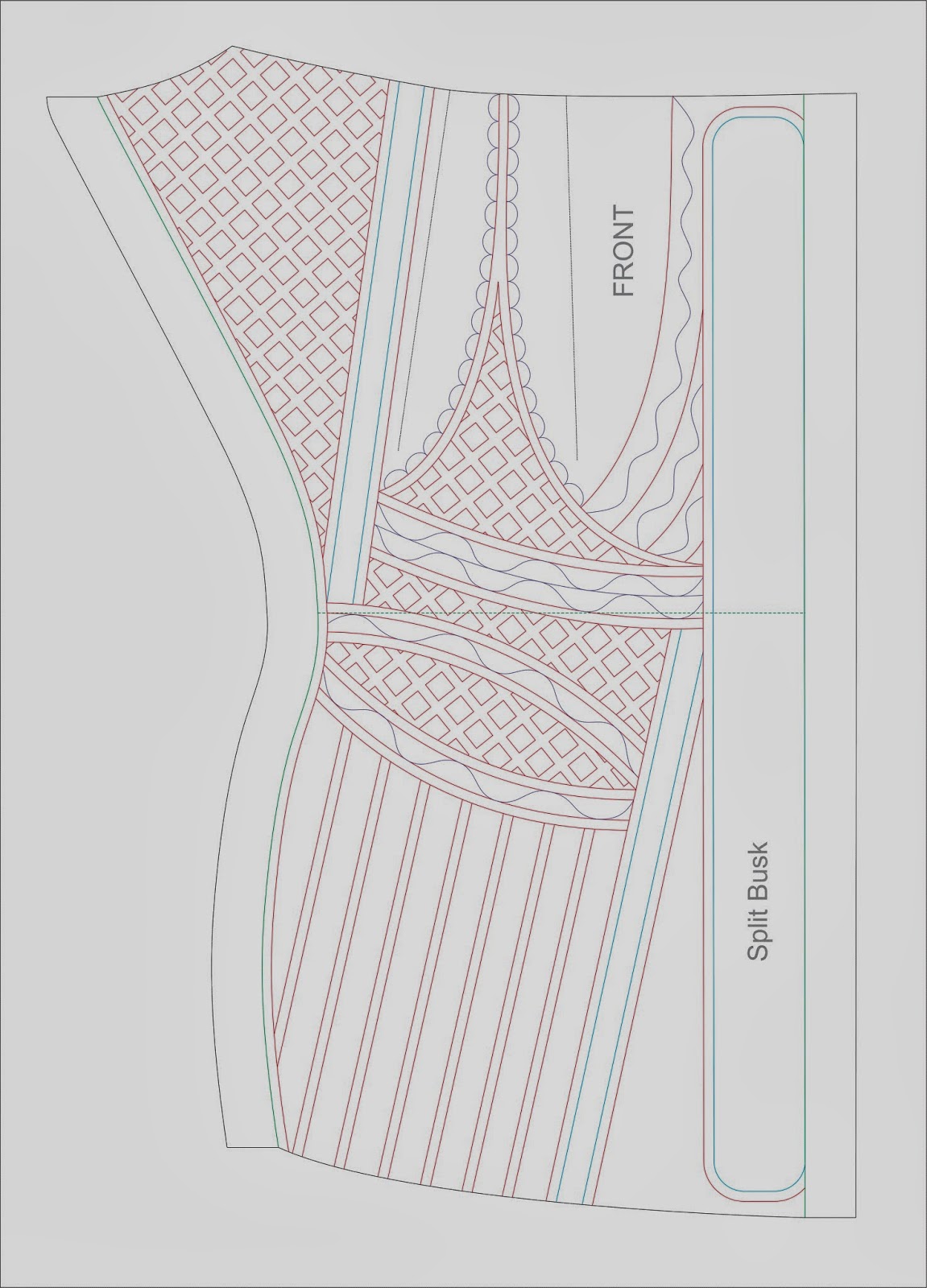 Since the criss-cross cording is the most difficult part of these stays, that's what we'll focus on.  Each of the squares that make up the criss-cross pattern are only 0.25" wide, so they're very small and difficult to sew accurately.  The space between each square forms the channel that the cord threads through.  I'm using a green shot cotton as the pretty outer fashion layer of the stays, with two layers of thin but tightly woven white cotton as the strength layers.  My stitches will go through all three layers of fabric, but the cording will be run between the two white layers of cotton.

The first challenge was figuring out how to mark the stitching guidelines on the fabric.  I could have made all the markings on the back of each piece, but I find that the top side of my stitching often looks a bit more precise than the back, so I needed a way to mark the green fabric so that I could stitch accurately, but not have the markings visible later.


At first I tried using a water soluble fabric marker that had a relatively fine tip.  It showed up very well on the fabric, but since it is a marker and the fabric wicked the ink out a bit, the line it left was fairly thick.  The thicker line made it very hard to see where exactly to stitch.  Some of my test squares were more parallelogram than square, and the width of the squares varied between 5/16" and 3/16" wide.  It may seem like I'm being overly picky, but that is a difference of 1/8", which means I was off in some areas by the width of half of a square!  When working at such a small scale, even a little bit of deviation becomes extremely obvious.


I considered using a fine mechanical pencil to draw more precise, accurate lines, but there were two potential issues.  One, I was worried it wouldn't wash off well, leaving me with pencil lines all over my stays.  Two, it's actually pretty hard to draw an accurate line on this fabric with a mechanical pencil, as the pressure of the lead warps and distorts the fabric as you're trying to draw.


Luckily, I was able to solve both issues at once with my favorite secret weapon:


Starch has saved my butt on many a sewing project.  Here, it serves two purposes.  First, it stiffens the fabric so that it is almost paper-like, so now I can easily draw on it using the mechanical pencil without the fabric distorting.  Now I can get perfectly straight, thin, highly accurate stitching lines!

Second, thanks to Lifeofglamour's various experiments with tinting starch for use on ruffs, I know that very often, pigments and dirt that are mixed in with or sitting on top of starch wash out without staining the fabric.  When I tested this theory on my fabric, washing the starch out washed the pencil marks down the drain too!  You can buy spray on starch or the liquid kind you dip your fabric into from the store, but thanks to Frolicking Frocks (dude, check out those petticoats!) I'm a convert to making my own out of cornstarch.

Now that I've got that settled, the last step before stitching is to use a lightbox to trace my design onto the fabric. 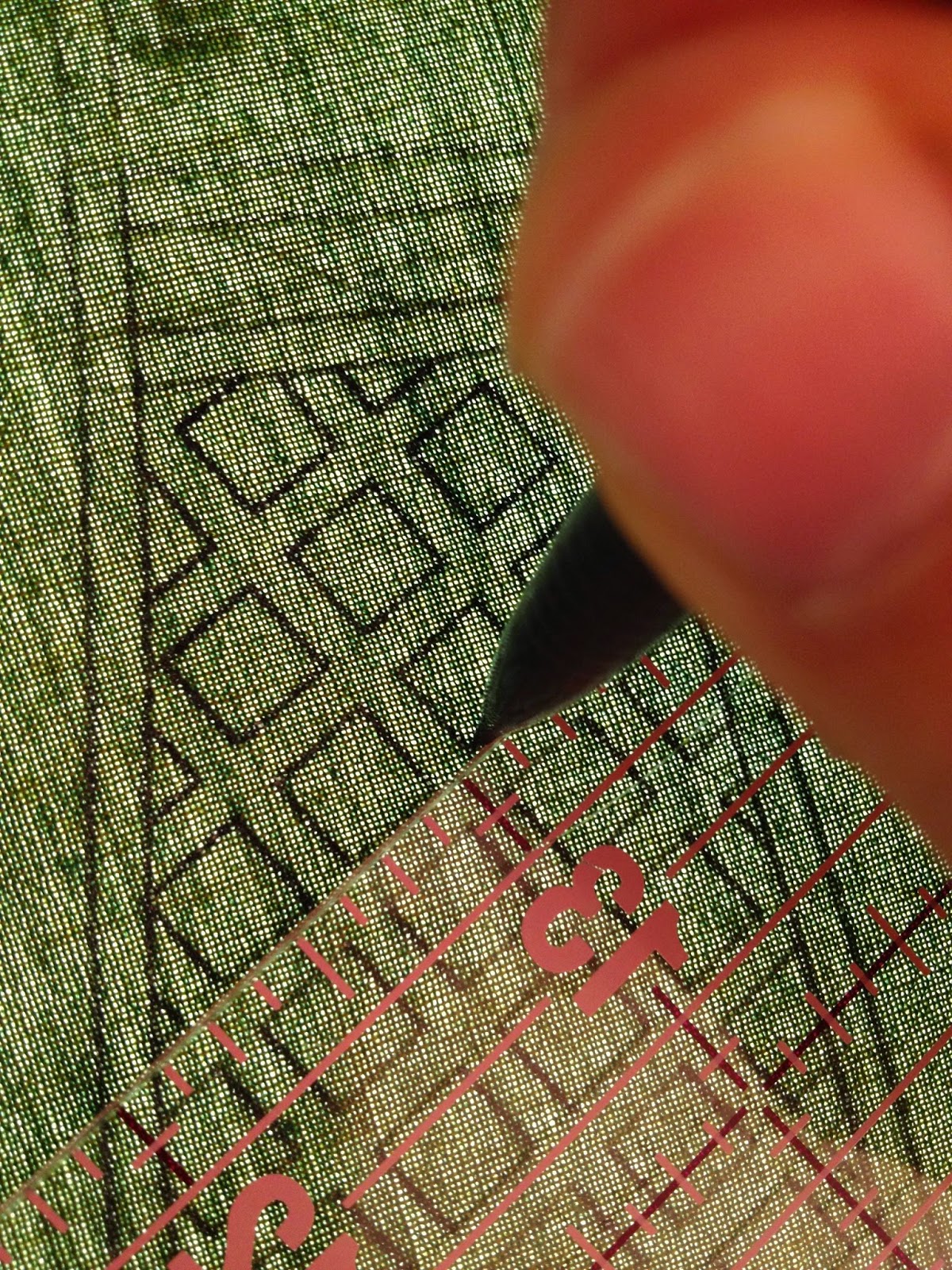 My original plan was to hand-stitch the stays, but I came to my senses after attempting a sample.  I tried using my modern sewing machine, but it's very hard to stitch a line precisely 0.25" and stop in exactly the right place using the pedal control, so I pulled out the little Singer 99 hand crank machine I refurbished a few years ago instead.


With a hand crank, it's really easy to stop right at the exact number of stitches you want.  A lot of fiddling and several tests later, I settled on a stitch length calibrated to precisely 1/16 of an inch, giving me squares that were 4 stitches wide on each side.  Getting the correct stitch size is no mean feat on these old machines, since you set the length by screwing an unlabeled knob in or out as needed.


Now that I've got the length set, sewing each square is now as easy as starting the needle in the right place, sewing 4 stitches, sinking the needle on the 4th stitch, raising the presser foot, turning the fabric, putting the foot down again, sewing 4 more stitches, etc, all the way around the square. 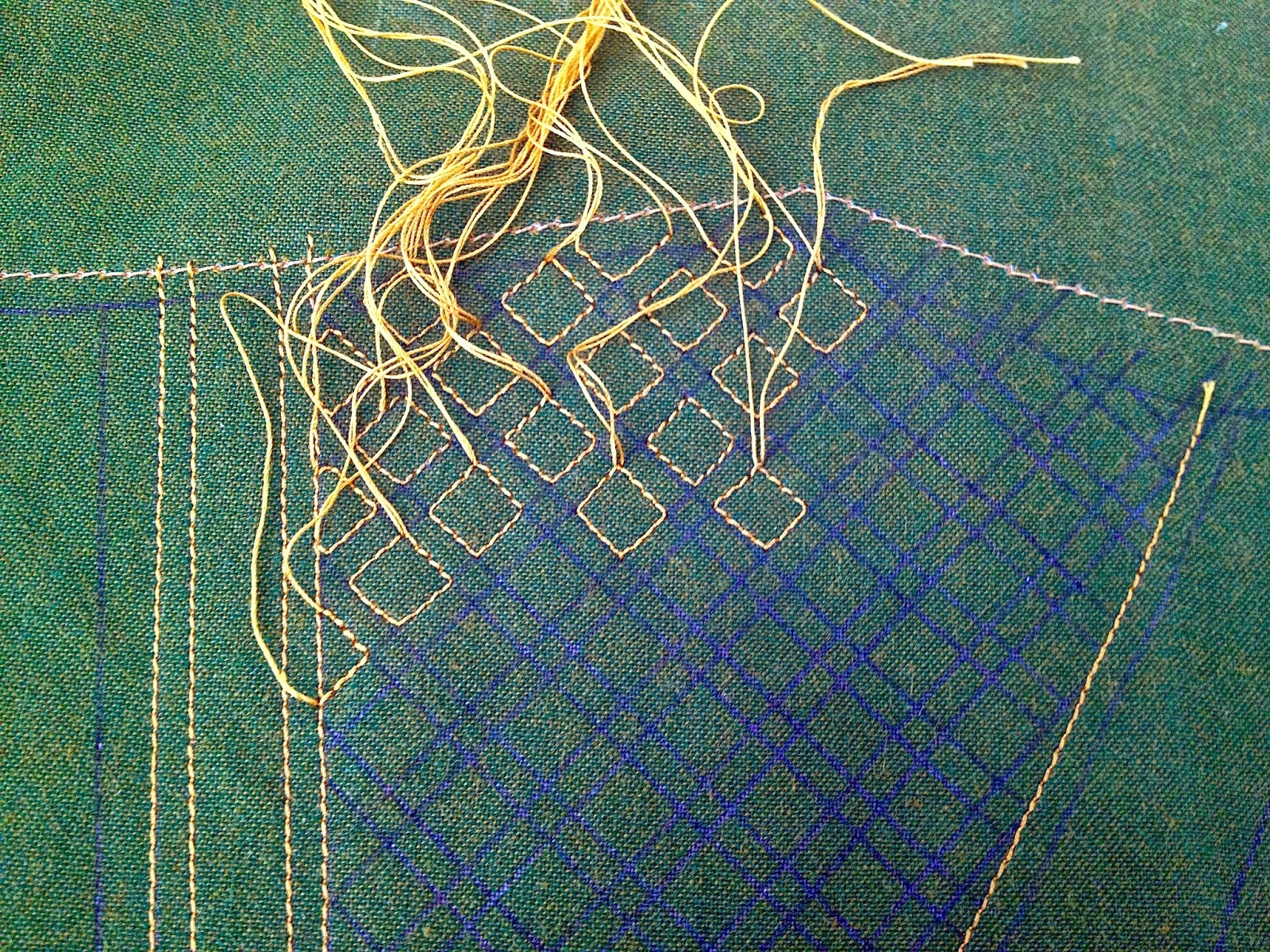 This leaves a bunch of thread tails all over the place.  Of course I can't just trim them because the stitching would come out, so the loose threads are pulled to the back and tied off.  Since I'm a bit paranoid about the knots coming undone, I put a dot of Fray-Check on each to prevent unraveling.  Remember to test the Fray-Check on an inconspicuous spot first!  My layers are thin, and on the first few knots I used too much and it soaked through to the front.


At first I was tying the threads after each square, but it's more efficient to sew several squares, then flip to the back and start pulling through/tying off.  The problem with doing it that way is that those loose tails get in the way of stitching, and if you sew through the tail of a square a few rows down it's a mess to untangle.  Luckily, I'm owned by two exceedingly furry felines, and thus have a clothing de-furring brush that doubles as a way to clear all my loose threads off to one side with a single swipe.  Guess the fuzzbeasts are good for something. 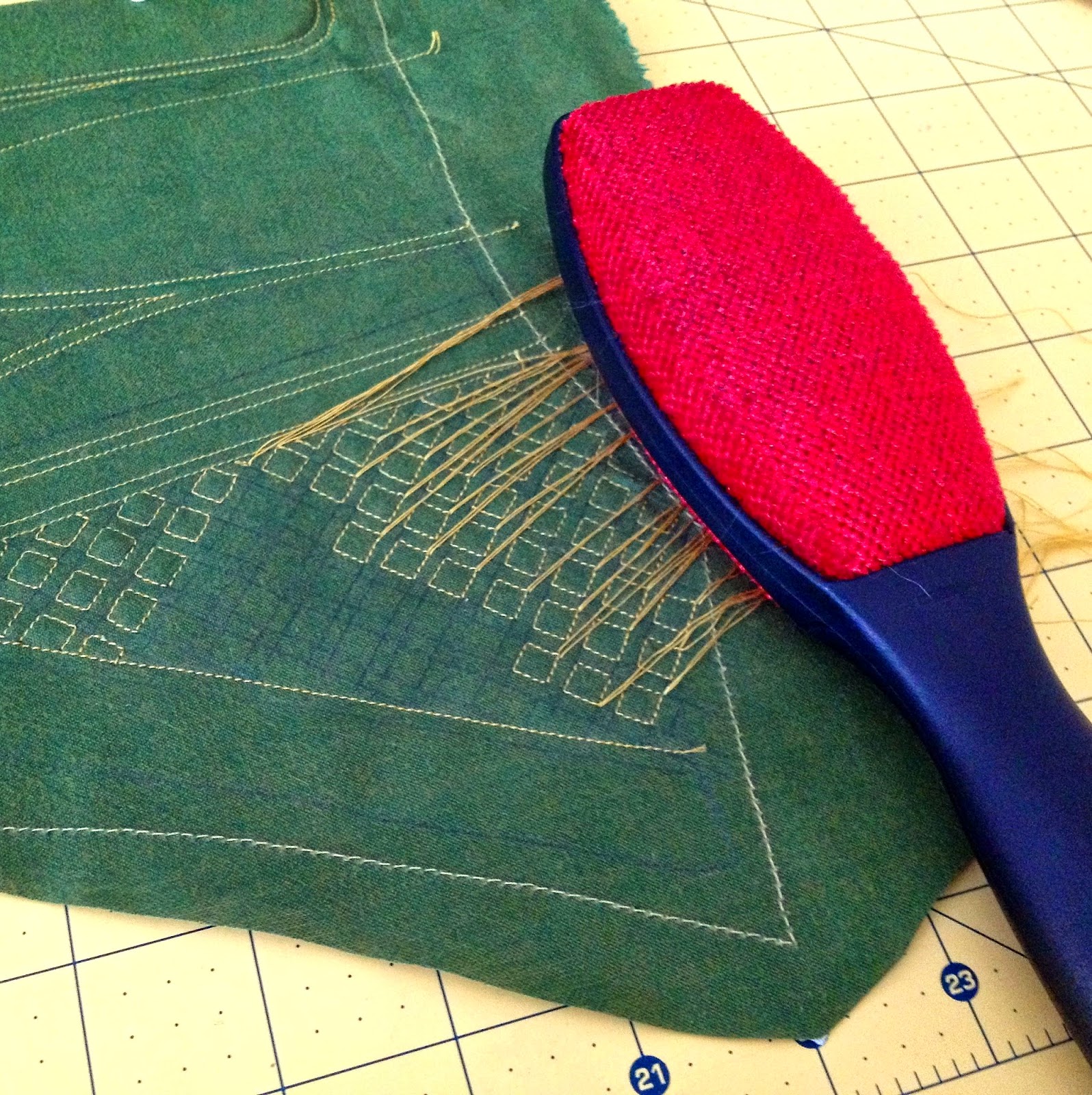 There's something like 200 tiny squares on just ONE front panel, plus more on each side panel, so you can see why this has been taking me a while!

After washing the starch out, drying, and pressing each piece, it's FINALLY time to stuff some cord in there.  I'm using the same Sugar n' Cream cotton cord that I used in my corded petticoat.  You'll want a cord of a width that fits fairly snugly in your channels, so choose accordingly, or stitch your channels to accommodate the cord you wish to use. 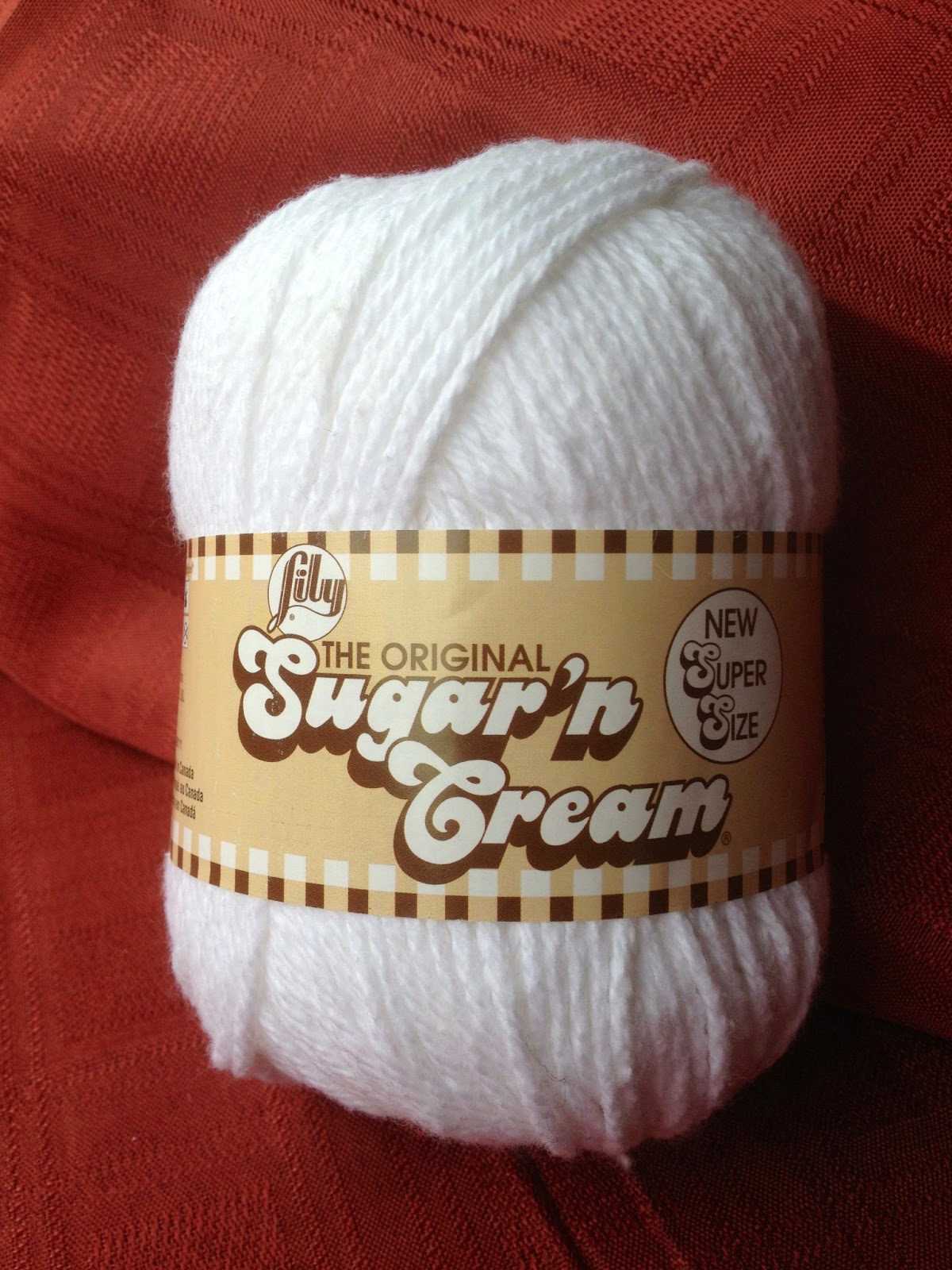 I'm using a thick, blunt needle with a wide eye.  Tapestry needles are perfect.  The eye should be large enough that the cord just fits through it, but not so big that the needle won't fit through your channels with the now doubled cord in tow.  I also have a pair needle nose pliers, because despite my best efforts, the eye of my needle still gets stuck in the fabric sometimes. 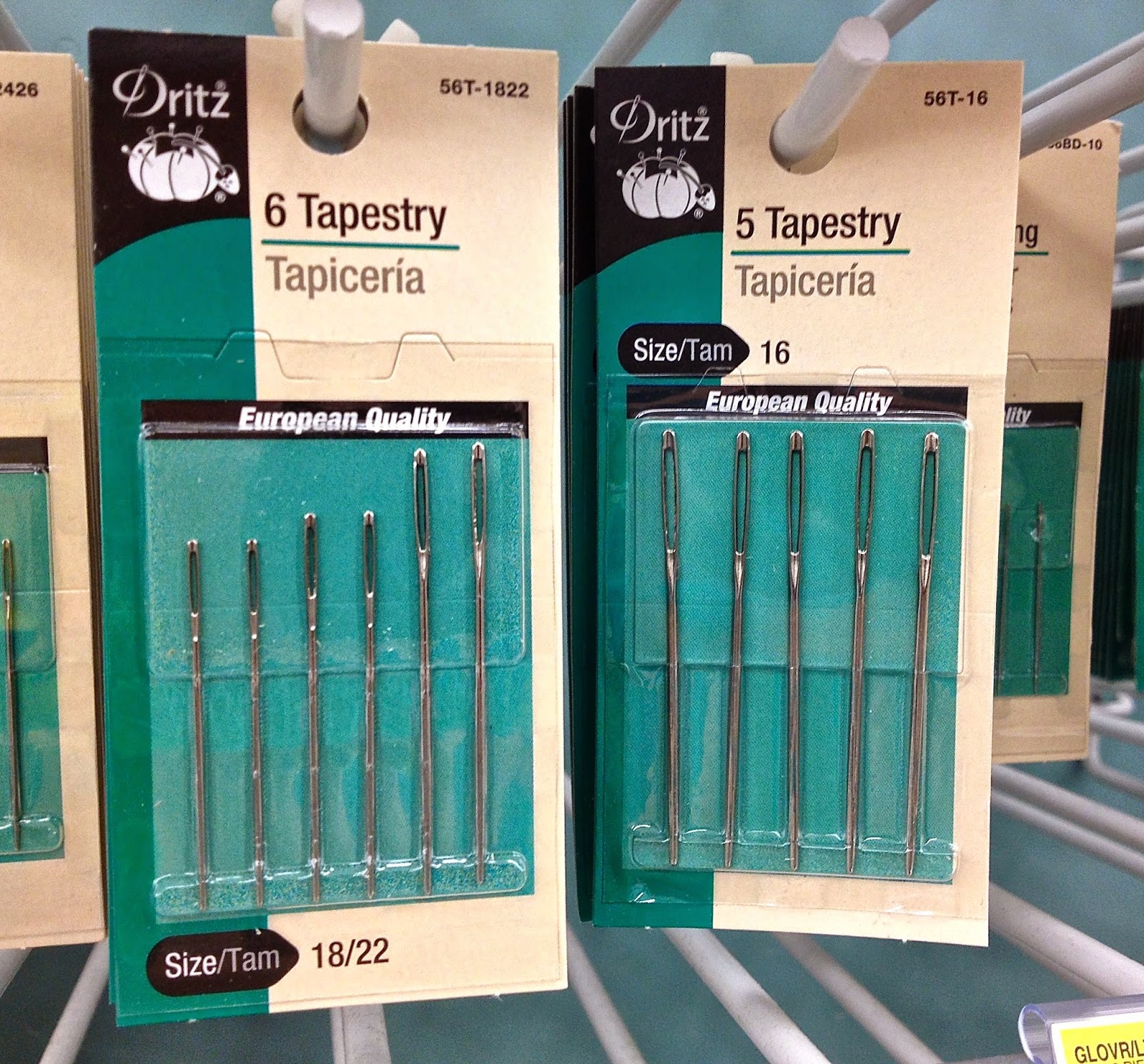 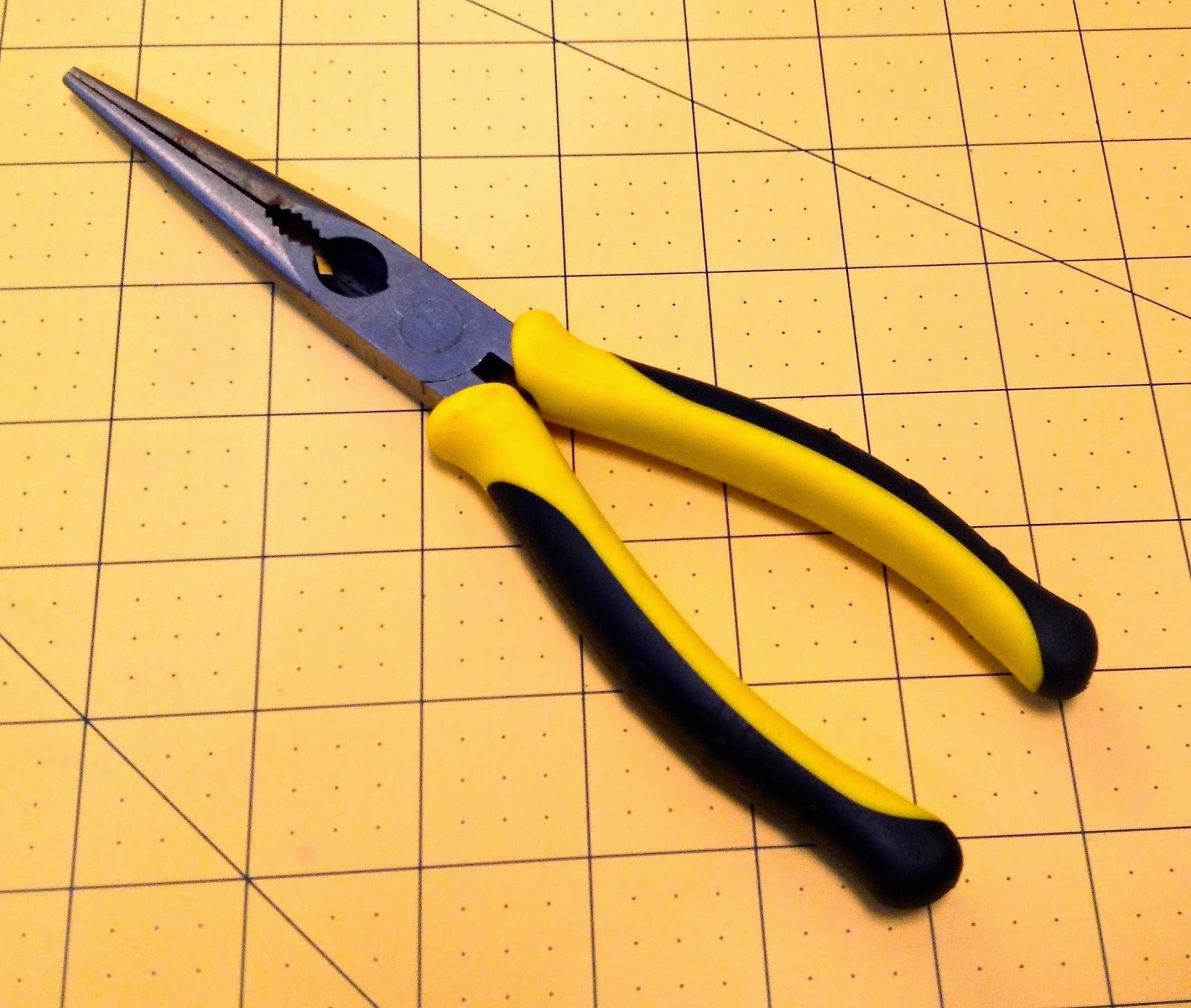 When I made my last pair of corded stays, I broke the only good needle I had and swapped to one that was nearly the same, only sharp instead of blunt.  It sorta worked, but the sharp tip kept shredding the fabric on both sides, and those scrapes later unraveled into larger holes, allowing the cord to poke out.  I wouldn't have minded if they were all on the inside, but most of them were on the pretty outside!  If all you can get is a sharp needle, grind the tip down.

Once inside, the needle is pushed down the length of the channel, dragging the cord behind it.  It's tight, and I have to moosh (super technical term) and manipulate the fabric around the needle to move it along.  Sometimes the pliers are necessary to pull the needle through the channel too.


At the opposite end, I poke the tip of the needle back out through the back fabric and pull it out, taking care to not pull all the cording out with it!  The pliers are also super useful here, as the eye of the needle generally gets stuck on the way out.  All the pushing and pulling on the needle is pretty rough on my fingers; using the pliers instead solves that problem.  The downside is that I'm more likely to break a needle when pulling on it with the pliers.


I don't trim the cord close to the fabric just yet; instead I cut it so there's about 1" still hanging out, then move on to the other channels.  The places where the cords cross are a bit tricky to get through, but it's doable.  Eventually I end up with a small forest of cord ends growing out of the back of the stays.


Once I've got a whole section done, I start trimming the stray tails.  I cut the cord pretty close to the fabric, but not right flush with it.  There are till some tiny tails hanging out.


Then, without holding onto the cord, I tug on both ends of the channel, stretching the fabric slightly.  Most of the tails pop back into their holes and disappear.  A few are still sticking out a bit, but this is the inside of the garment, so I don't care overmuch.


There are still holes at the start and end of each channel, but again, it's the inside, and they close up a little with time anyways.

Wow, that got lengthy!  If any part of this tutorial isn't clear, let me know and I'll try to unmuddy it a bit.  If you've got a cool cording project you're working on, show us in the comments!  I've still got a few panels to go, so I'm off to the sewing table again for another late night.
Posted by The Laced Angel at 9:30 PM