Gettin' Rid of the Funk

Yesterday I showed you some vintage saris and dupattas I ordered off eBay.  They're beautiful, but they stink!  But how to wash a super delicate silk that has been embroidered with actual metal, not to mention beads, sequins, and other embelishments? 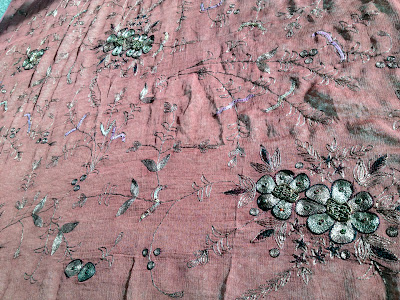 Pretty, but impossible to wash.  Or is it?

I'd heard of theater costumers filling up spray bottles with vodka and lightly spritzing dry clean only items between shows to get the funk out.  Nothing I found online indicated that it would hurt the silk at all.  Vodka can be used as a disinfectant, so it could probably kill any germs that might be adding to the general odor in my fabric.  I've also seen jewelry cleaned with vodka, so it likely wouldn't hurt the metal embroidery and might in fact shine it up a bit.  I figured I'd give it a shot; at worst I'd be out some cheap booze and the $30 I spent on one dupatta.


Disclaimer: While the following procedure worked fine on all the fabrics and embellishments I tested, it could potentially harm your fabric.  Use at your own risk, and definitely test a swatch first! 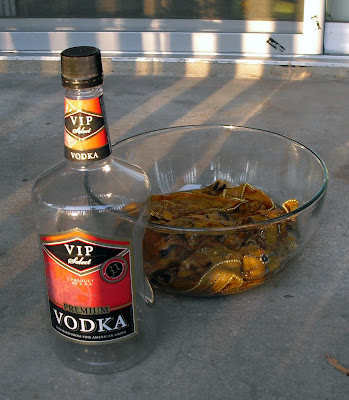 First off find some super cheap vodka, the kind you wouldn't drink if someone paid you.  For only $10, I got a 1.75 liter bottle.   Soak a swatch in the booze for a while to see if the fabric color changes or any damage to embellishments occurs.  Obviously, if it ruins your swatch, don't continue!

The photos I have of the process swap back and forth between various dupattas, so don't be concerned about the color changing between pictures as it's just a different fabric. You may want to do this outside, as the fumes from the booze get quite strong.  Loosely place your fabric in a large bowl and pour enough vodka over it to soak it thoroughly.  Swish it around a bit, then let it soak.  I don't know if soaking is necessary, but if it doesn't hurt and might help, go for it.  Check periodically for damage or discoloration.  (Note: my vodka turned a little reddish, indicating that some color was coming off.  The fabric looked fine though, and I chose to continue.  In the end, it didn't seem to noticeably change the color of the fabric at all) 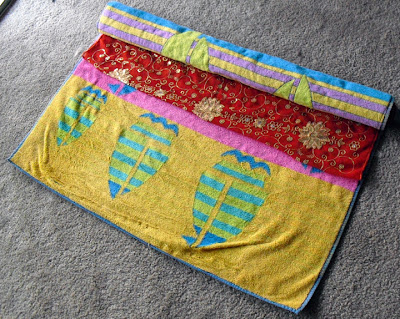 When you think it's as clean as it's going to get, take it out and gently squeeze as much excess vodka out as you can.  Spread the fabric out on a large towel.  Starting at one end, roll the towel up with the fabric inside.   Squeeze the bundle so that the towel soaks up the extra booze.  Or, if you're lazy like me, just sit on it and let your weight do the work. 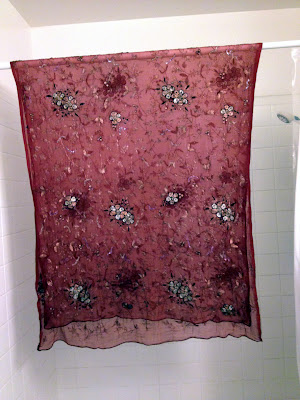 Hang your fabric up to dry, preferably some place inside.  Sunlight is harsh and damaging to many fabrics, and especially to metal embroidery.  Smooth out any wrinkles with your hands since you probably don't want to try ironing this stuff later. 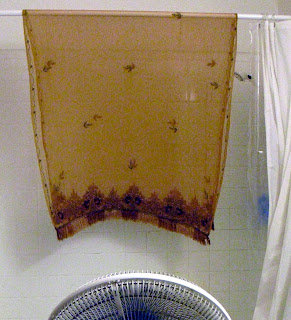 Impatiently speeding up the drying process with a fan is ok too.  I found that with a fan these dried in about 20 minutes flat.

Before and after taking a boozy vodka bath

The vodka really shined up the metal bits!  There were a few tarnished areas that didn't lighten up much, but on the whole the dupatta got much sparklier after its vodka bath.  The silk feels nice and clean and retains its color and texture.  I was concerned that the fabric would retain a boozy smell afterward, but once it was completely dry it just smelled nice and fresh.  The funk is gone, and I didn't ruin anything except a bottle of nasty cheap liquor. 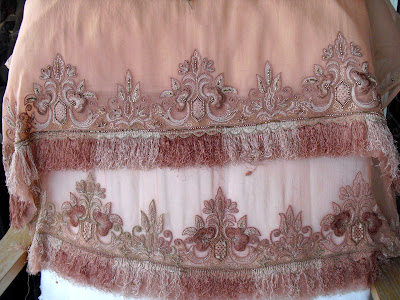 Now I can make a beautiful gown out of this and not worry about assaulting anyone's nostrils!
Posted by The Laced Angel at 2:50 PM